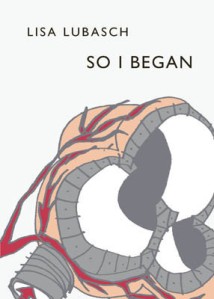 If you read Lubasch’s poems backwards you find the erasure of meaning, a starting again:

The spirit of reproduction enters a new mode. It works forwards, too, but the spirit of becoming is the return; to truly begin we must learn to begin again.

And before, on page 9, “Not a telling, but a faltering. Through trees her sight fell, upon” — Beckett said fail again but fail better, and if dialectics is a movement from nothing through nothing to nothing, where the spirit finds no resting ground, then the mode of poetry is the tracing of these gaps. It is clear in the faltering, in the stuttered prose poetry with its double-stop of caesura and period.

So I Began opens with something of an Ars Poetica, a delicately-crafted meditation on the Word that strikes me as in the mode of Oppen’s Of Being Numerous, the struggle with being-in-the-world, being-of-the-world: 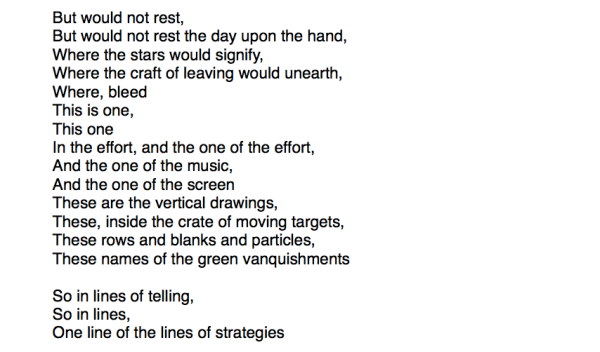 Good poetry can be a prayer that frees us from the duty to pray, not in the protestant sense of returning the power from the priest to the Book, but in the Mallarméan-modernist sense of writing a new book altogether, of renumbering the constellations, that space “Where the stars would signify”. And the beautiful moment of opacity — “What, in words, would stifle, / What would lend / The no and yes to universal things // These suggested ends, how ends would speak / Them and be heard”.

This is difficult poetry, dense poetry. Lubasch uses images sparingly, like a chef at a fancy restaurant. Her mode is intensely philosophical, but the form is poetic to the end, more in line with Mallarmé’s playful philosophical quest than some more unfortunate metaphysical meditations set to line breaks. There are no end-of-poem punchlines, no satisfying reveal. Indeed, each poem seems to hang off the page, unfinished, and the effect of reading multiple pages in a row is a growing anxiety, that sense you’re entering into a domain that is not reserved for you, yet Lubasch has invited us. Something like the feeling of transgression while reading Sexton.

This is a book spare in text; good, because every line is a gift and a burden:

Here we see layers of re-writing, of that post-modern mode where things are shifting, unclear, frightening:

Language is for this book a last refuge, a resting place of the One (I plus Other?), but it is constantly in danger, falling away–do we hear the substance or the distance from it? What is the dialectic of language?

Obviously, Lubasch loves language, despite (or because of) her wrestlings. Listen to the music of these lines:

And this only continues:

There is something satisfying and voyeuristic in tracing the drama of writing, this sort of modernist tradition of analyzing what the hell our art is doing, and for whom? Here we have the self, the stranger (masculine?), the stars, the blood, anxiety, Open and Cheat.

On page 28 is the beautiful entering of the discourse of power, something obscene in its categorization, its attempt to conceptualize:

It is “Entering. Into you.” It is “A brutalizing structure”, that which classifies as victim, Something lingers, something resists, perhaps the feminine, the Spirit.

The analytic and scholarly language of the poetry is constantly breaking down, with its overmuch periods, with its redactions and silences.

By section 2 things fall into place, the body begins to take shape around some un-named trauma, something unclassifiable with which language must struggle.

What stifles, what betrays? Is it the Word or is it the Body? The poet is Athena with her feet on the earth and her scalp touching heaven. It is, in the end, the word “bleed” that seems to guide the reading.

In “The Situation/Evidence”, forgive me for reading the character “Open” as “Oppen”.

The speaker’s name is Cheat. The redacted lines are obviously cheating — “The second thing I notice is that I–I– / The third thing develops as the light moves down the tumbling place…. / The tumbling place is my name for– / One of the things that tumbles into the tumbling place is our–” (5). One cannot be mad; the lacuna has its function, the breath of a human in the midst of so many words.

This poem has the feel of speculative fiction. What is the “bondage suit”, the mystical and always-not-yet-arrived medications and provisions? The levers on the spine? The medicine is paregoric, which comes from Greek for soothing, from the verb “to speak in the assembly”. Of course the role of speech returns, and it is a soothing thing, a soothing thing we lack and so we are willed to speak (note “we are willed”, not “we will”).

There is always something mechanical in science fiction; the technology that grinds up humans, but then the protagonist busts through the machinery with her humanity. Or maybe not, or maybe not.

The forms shift from musical lines with white space on which to feast, to prose verging on short story, to something like a stuttering journal of a psychotherapy patient.

And “Getting Around It” is one of those unsettling poems that reveals a mechanism of the mind so quickly that we find a new thing breaking loose from something so old and well-worn, as old as our Imaginary and our Symbolic. There is something scientific about poetry like this; because the poetic gaze is upon the detritus of society, but when we turn that gaze inward.

It’s funny; it’s funny — the poem passes like an analytical philosophy argument through a series of mental exercises that build the self, and they all hit against the hard rock of something, and thus are rejected, and in the end one has no toes and can barely stand but at least we are done with that traumatic notion of progress, that 19th century dream and that 20th century monster-in-the-shadows. We are nervous. We are hysterics. We are cutting off our own toes, but it’s okay because we are looking for a beginning, hovering between standing and falling.

This is good old-fashioned poetry of the New. Which is fortunate considering the title and that the cover art is a heart cut in half; or is it eyeballs trapped in a heart?

Liam Swanson is an MFA student at the University of Arizona. He writes on/studies communism, feminism, the politics of the apocalypse. His work has recently appeared in the Sonora Review, Cabildo Quarterly, and the Platypus Review.