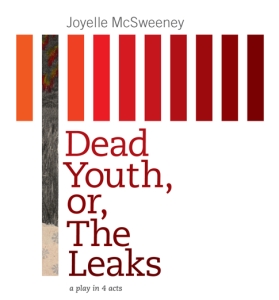 “O lovely, lovely. DEAD YOUTH you are so talented, so flexible and double jointed, so committed in your willingness to become any kind of media” (41).

May they rest in peace. But in Joyelle McSweeney’s play in four acts these titular dead youth, whose voices echo and multiple in number, do not rest; they ache, breathe, even hunger. They remember and while they may be young, teenagers really, they are adult in content, commentary; they are aware of themselves as a part in a working piece of art.

Let it begin on a ship, this Tempest-driven interpretation. However, it might as well be a mothership. Henrietta Lacks, its prologue; the great mother of the play who speaks only sporadically but empathetically on the subject of the dead youth, technology, and most stunningly, motherhood. “I was immortal,” Lacks states by way of introduction, “in my ability to be knocked down / and spread myself out to take the punch again. / In this sense I am still a mother. / I am forever taking the punch in the gut” (13).

“Mother” and “motherhood,” particularly when placed beside the term “dead youth,” redefines society’s definition of the term. Julian Assange, the ring-leader of the dead youth and the anchor of this ship, equally and comfortably utilizes the term, blurring the gender line: “DEAD YOUTH, I adore you, and I have personally vouchsafed you here at my maternal bosom” (19). But beware. Where McSweeney’s true art lies is in her subtle complication of the term by means of retelling the violent deaths of the dead youth in the first act:

Of the night they wrapped the barbed wire around me
and threw me into the river.
I was chained to a cash register.
Forever. Legal tender.
So I could purchase knowledge.
So I could chase after knowledge forever
In the madrassa of the muddy river
and never come up again.

Highly political, highly critical of technology’s role as relates to the youth culture, McSweeney’s mothership, DEAD YOUTH, OR, THE LEAKS, roots itself by questioning information through the appearance of Assange, Wikileaks, even the Muse who cites “The Internet, my second mother,” after which, all in the play approvingly nod (37). All of this culminates in McSweeney’s unsaid, driving question: how have we become what we’ve become? What has mothered us? And the answer that DEAD YOUTH provides is the height of a towering list.

Which showcases McSweeney’s clearly poetic nature and language play throughout the four acts, prologue and epilogue. McSweeney’s attention to and playfulness with language transforms this four act play into a play in which the youth are anything but dead. Utilizing quotidian and popularized phrases, McSweeney resuscitates the youth: “Dead Youth 1: ‘It’s FUBAR. But YOLO. I’m AWOL. Lost at cee’” (17).

However, with the play deeply rooted in the current affairs of the early 2000’s, the question arises of how this play—as all art that adopts a highly generational tone—will move forward into the future, how it will age. Which is to say that McSweeney, by engaging the notion of the dead, has only succeeded again. For while my reading in 2015 may bring the dead youth forward into life through their vivid and sincere dysphemisms, these youth will only die in the future as popular culture—and with it, popularized language—rides the eternal momentum of fashion, dying out.

There is no doubt that what Joyelle McSweeney has crafted here is poetry. While classified as a play in four acts, the language itself is worthy of indulgence, plot aside. For instance, in the voice of the Muse:

Motives are to me
what grappling hooks are to
deep sea divers. Throw me an anvil
and teach me to fish forever.
I’ll lie under the sea, fishing, fishing,
and lying, lying

Or, in the voice of Henrietta Lacks:

When they autopsied me,
I wore a nightgown of malignant pearls
inside my body, as if I were a Queen that had swallowed
my own crown
or a demented bride with her own cake sewn up inside.

So full of breath is this imagery that I must raise the question: Are these youth dead? A play that sails in a out of the past, rising up out of Shakespearean mist, and citing everything from Commodore 64 to Private Bradley Manning, this ship reads more like a motherboard, culturally circuiting the internet—i.e. information—to these dead youth who learned too much, who perished violently and young in a sort of current 2000’s form of warfare. This ship, “the SS Smirk, moves on dreams”(19).

Allison Donohue, born in Washington DC, grew up in Centreville, VA. She holds an MA in English Literature with a focus on Poetics from Texas Tech University. In the fall of 2015, she will start her MFA at the University of Oregon. Her poetry is forthcoming in Forklift, Ohio.