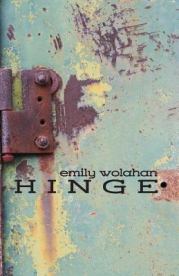 Reading Emily Wolahan’s Hinge (The National Poetry Review Press, 2015), I’m reminded of the fact we live in “A tenable now, immersed/ in churned waterways, calling to its transient/ population. What exactly do we plan to do?” Her debut collection floats in an “armor. . .constructed from romantic movies,” ferries us past revelations in the form of hedge dew and field light. Hinge’s is a firmament that ponders the liminal as it plays out in arguments and bodies of water alike. From town planning to the Munchian scream, Wolahan illuminates the latch.

Jon Riccio: The verticality of Hinge’s poems – tighter margins, medium line lengths – adds to their reading pleasure. Was this the layout you always envisioned?

Emily Wolahan: I really enjoy a tight line and worked at honing that skill as I wrote this collection. An economic, sonic line matched the controlled tone of the speaker throughout the collection. These poems explore ideas and emotions from a very cautionary vantage point. I wanted the look and sound of the poems to match.

JR: Five of your poems have the word “Argument” in their title. What aesthetic forces must be at work for beauty to rise out of conflict?

EW: Interesting—when I hear “argument,” I immediately think of rhetorical strategies used to convince a listener or reader of your point of view. Comes from years of teaching comp, I guess.

A good rhetorical argument acknowledges conflict and finds an intellectual way through it, which is very relevant to Hinge. In the “Argument” poems, I wanted to harness an abstract idea as a strategy to conduct the discussion. That’s how I arrived at “Argument in Fog”, “Argument in Exucitasio,” “Argument in Optative.” Eventually, I start to just straight up argue with things, because eventually, I always argue. A contrarian to the bone.

The beauty for me is in creating opportunities to think my way out of corners. At the time, I found the intellect very beautiful and wanted to convey its promise and, in some way, the emptiness of that promise. You can’t think your way into action, as Hamlet reminds us.

EW: I have a strange relationship with French. I spent a long time learning it, some time in Paris being snubbed for not knowing it better, and am continually drawn to reading French poetry. Incorporating French into my compositional practice always broadens my thinking, though very often no French appears. I’m currently working on a project that is directly influenced by the line structure of L’excès-l’usine by Leslie Kaplan.

I believe in reading as widely as possible, incorporating into your reading poetry from all over the world. Often that’s in translations, as in Kim Kyung Ju’s I Am a Season that Does Not Exist in the World or Tomas Tranströmer, Tomaz Salumun, and many others. I will muddle my way through French happily, however; the discomfort of not being able to whiz my eyes down the page and understand everything is enjoyable to me.

JR: “Wide: Letter to Herself” contains the lines “Within kitchen, drawer,/ within drawer, this porcelain bowl./ It will do. Will do.” which have a nesting-doll sparkle to them. How do they relate to the following page’s “indecision of paradise?”

EW: In many kinds of paradise (this one is a domestic), we may not have any worries, nor lack much, but we are also stripped of our intellectual faculties. That’s how I felt when I went from a full, New York City cultural existence to being a new mother in a small city in Northern England. I felt stripped of my brain and my ability to decide. The perfect happiness of having a healthy child and one’s kitchen in order didn’t escape me, but I felt the push against it too. Nesting-dolls embrace each other and capture each other.

JR: The above-mentioned poem concludes with “Light rain, cotton rain, cashmere rain./ Her dangerous belief in expertise.” When is novice-ness the best creed?

EW: I’d say, almost always! When are we not in a position when we are, at least in part, new to an action or situation? I’m very interested in inhabiting the position of “not-knowing”—as intellectual curiosity, but also emotional bafflement. An early title of this manuscript included the word “Acquaintance” because I was exploring the “knowledge of acquaintance” (versus “experience” or “expertise”). What results do we experience when we are somewhat-familiar-with a set of problems, but not at all expert in solving them?

There’s a palpable sense of anxiety in that, but there’s also joy in it. The energy of flying by the seat of your pants through life.

JR: You’ve lived in Britain, Hong Kong, Italy, and Saudi Arabia, to name a few of the countries listed in your bio. This, coupled with “That some solutions/ become answers, their spatial disclosure/ a forklift of readiness” (from “Sly and Unseen”) has me wondering how these travels honed your tools of investigation.

EW: That travel is the collected experience of the forced travel of my childhood and chosen travel of my adulthood. When I was an expat child, I refused to take pictures after I lost my Kodak Star 110 camera at the Trevi Fountain. I proclaimed I would rely on my memory. Alas, I am no Funes. I could observe, but not remember every detail.

What I took away from that observation of people and nature, however, is that there are multiple solutions to any given problem. A European city solves a civic need in one way, while an East Asian city solves it quite differently. One bird solves its problem of being prey through camouflage, another through strength in numbers. Designs, either industrial or evolutionary, develop over time. Some become universal, some stay idiosyncratic.

JR: You’ve melded rhythm and sound to give the best directions: “The insistent exit can be found/ in night field, short wheat/ bundled in shadow” (from “Quite Cold in Cloud”). Where best to locate a hinge’s entrance?

EW: I’d argue a hinge is not an entrance or an exit but the loose mechanism that makes either possible. While I feel liminal spaces are the most provoking of insight—what place cannot feel liminal at the right moment? Every place, and every angle of observation, can be made strange, thereby suddenly swinging open.

JR: We’re told “Some things/ are not suited for language. In the bookstore,/ you scream you want a particular fairy book,/ each fairy named, its powers afforded/ by the seasonal structures of miniature worlds.” In what ways does the fantastic serve the unspoken?

EW: What a compelling question. For a child, in particular, the fantastical and mythic can provide needed explanation of the often unspoken or hard to understand—death, betrayal, power and powerlessness.

In “Argument in Fog,” where those lines appear, I’m exploring what can’t be imagined fully (death and suicide—even our own futures) and the frustration of meeting limits. Children know that better than anyone and small children scream over it. A five-year-old’s guttural scream, the physical reaction to frustration, embodies how I personally feel. The Munchian scream into a windy terrain. The unspoken is often voiced, but in animal terms, non-verbally.

JR: If, as you say, “The only guarantee is a world/ in transition,” how do we find comfort “in the hum hee ha of a town/ that proudly cares for its pavement,/ its paths, its bridges?”

EW: The image in that line comes from my interest and admiration for town planning. There is an incredible amount of unrecognized labor that goes into our cities and towns—from garbage pick-up, to coordinating with various skilled laborers in order to paint a bridge, design a lamp post, or plant a patch of garden. I’m personally inspired by that web of human action that embraces us because our own personal lives are subject to so much transition. Nothing is certain in our lives, no matter how vastly different they might be. Change will come. The Chinese curse, “May you live in interesting times,” defines us. We are living in interesting times.

My current project is very concerned with the insecurity of our contemporary reality. If it’s not political unrest, domestic or international, it’s terrorism or environmental collapse that we could worry about. Every day seems pregnant with insecurity. I’m working on a poem in sequences that attempts to write from within that insecurity.

JR: I was pleasantly surprised to find the poem “Hard Soft Bodies” in a book called Hinge (“Universe the universe/ imagined red and luminous./ It needs to turn.”). Do you think there’s a cosmic latch? Can it be applied to writing?

EW: Surely, we’re all in this crazy game of writing to reveal something about ourselves or the world. The primary place, I think, is curiosity and self-discovery—then the added layers of “making.” In “Hard Soft Bodies,” I was conveying the experience of delivering an infant. The universal universe—and, yes, it must turn. That experience changed everything in my world—it was the cosmic latch that opened up my life and imagination.