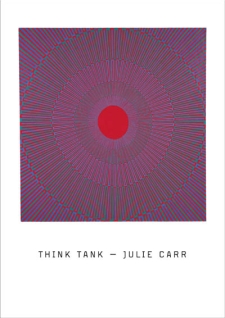 In the residue of “old devotions” and new meditations, Julie Carr’s Think Tank archives the still-digesting data from a-life-in-books into the mind, into the body. From the body, Carr gives back a novel text in an act more nuanced than ventriloquism: Think Tank dialogs in the ear-marked pages of ‘literature’ in a style that mirrors the craft of folksong and of jazz; to expand the role of inherited ideas and exponents of style; to take input and produce an output worthy of praising and pushing the boundaries of the art(form).

As equal parts homage and transformation, the long sequence that makes up Think Tank dwells in a metalepsis of poetic selves. Its alert, yet forgiving, engagement with the “sharp rocks of indeterminacy” yields more than pastiche. As Carr writes,

And narrative illusion breaks down metaleptically

Transforming expectations of early and late

Bubbling in “yeasted minutes” the resulting work presents an “effort to amass some new time” and track a consciousness of melodies that dialog with Vallejo, with Notley, with Myles, with Hume—among others.

A careful reader sees the many minds at work in this book and takes note of the overarching gesture that values the superimposition of selves that form the narrative of our lives and, as Carr trumpets, via Notley,

One has a secret self, a rather delicate pondering inner person. Much of poetry exists to communicate with this entity.

Carr’s Think Tank broadcasts an involved music that roams along the historical dial of thinking and makes a strong case for the pleasure of interior life and the pleasure(s) of thinking.

Douglas Piccinnini is the author of Story Book: a novella (The Cultural Society, 2015) and, a collection of poems, Blood Oboe (Omnidawn, 2015).

Read an earlier view of this book on the Volta Blog here. 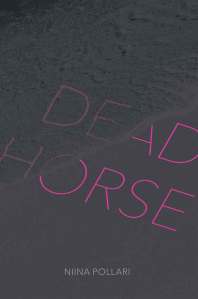 Pollari’s complicated ennui faces “the pathless darkness / [d]arkening more.” Suffused in a desire for something—a sign, anything—her speaker presses against the dissonance of the age,

It feels like noise
From headphones, in the air
In my hand, static
We stand still as coins
Silent
The apocalypse I feel
Is turning itself up like snow
On a dead channel

This casual, almost trite confession of a lost connection—of a “static” feeling, is familiar. And to look back a century passed in a few lines from Paul Verlaine’s “Apathy,” the affectation’s ageless, universal quality reveals itself.

The lonely soul is heartsick with this dreary
boredom. They say, down there a battle rages.
Ah, if only I weren’t so lack and weary,
if I could bloom a bit in this dull age!

The distorted “noise” and “static” that Pollari’s speaker addresses is a function of what money, or lack thereof can do: time and labor involved in a dollar as a unit of currency is silenced by it’s ability to be uniform—a symbolic object that rich or poor use in the same service. A coin is perhaps the strangest common object people encounter everyday; it is loaded with symbolism. And, while this relationship of money to gold and its promise is silent, the inequality of money is silencing.

The capital in capitalism, “like snow / on a dead channel” is a bleak truth. It begets the unrest caused by the severe financial disparities of late-capitalism.

It is this disconnect that pricks an apocalyptic nerve. Pollari’s poker-faced delivery of lines like “[t]he imported shoreline is washed away each year” embodies the millennial dilemma: the inevitability of a future debt compounding our existing
debt.

In “I Owe Money,” debt not only defines, it radiates in the superficially baffling way that ‘No Credit is Bad Credit’ threatens populations into the sudden accretion of crippling financial obligations.

I owe money, a large amount
Tied to my name, and following me around
The hundreds of dollars I relinquish every month
I don’t even miss it
Paying money is part of me
Like my human face
The amoebic debt that sparkles around me
Like a beautiful shirt
And,
Ownership is gathering things
And gathering things is a kind of self-definition
So just like that, I have gathered debt
And so I own money and let it define me

“Ownership” is “self-definition” is owing money. This debt is a type of added value. It offers a sense of worth, “like a beautiful shirt” you buy that maybe you shouldn’t but you do anyway.

The pissed-off feeling braided into this kind of institutionalized spending resides in the promise of potential, the fake it to you make it offering of every borrowed purchase made in promises.

Consider a few lines in exchange between Rocco and Leonora in Ludwig Van Beethoven’s Fidelio,

If we have no money, love cannot comfort bring,
Sadly life drags on, and sorrow follows
But when the coin jingles in the pockets,
Then fate is our prisoner.
Yes, gold brings love and power,
And all our wisher fills.
Happiness is the slave of gold;
Oh what a precious thing is gold!
Nought with nought united, what remains?
At dinner sweet love, and after dinner hunger;
May fate smile upon you and bless your endeavors.
Arm in arm, plenty of money in the purse;
Many a year you thus live.
Yes, happiness is subservient to gold:
oh what a precious thing is gold!

You can easily say so, Mr. Rocco;
Yet in truth now there is something
else which would not be less precious
to me; but I observe with sorrow that
with all my endeavors I cannot attain it.Rocco:

And what is this?

The certainty of our lives: life is a debt we pay by dying. We live in this debt as characters that seek the acceptance of our times.

Debt is to desire a certain future though we are never exactly in it. We arrive in a version of our desire, our dream. Pollari’s speaker survives at the crosshairs of time. She writes,

In the present, at a center that is just “wide enough,” there is the sense of all grains that have yet to pass through the waist of the hourglass and all the grains that already have.

The voice of these poems, like a grain of sand part of a larger beach, is fated to a kind of eternal erosion.

It’s blue around the eyes sockets
Like a mortal gleam

Pollari’s poems make apparent the baleful rule of existence—if you are alive you will die. Moreover, the inherent drama of your life is that it’s your own and “[t]he death of a body means nothing / [u]nless it’s your own.” Pollari strives at an elusive, perhaps selfish clarity, predicated in an interior knowledge that reflects her speaker’s environment. However, the environment has little to confess. It is opaque. The rules of nature and the rules of living were made by some other agent. The resulting position of Pollari’s speaker becomes one of both suspicion and indifference.

Nature bores me
The way a thing I don’t understand bores me
Like when I looked at an article about plagiarism
Sometimes I just can’t think about something
I can only describe it with words.

Norma Cole writes, “a poem is a made place, a deedless deed that stakes out or constellates ambiguity without laying claim to it, without attempting to master or contain it.” The seemingly wavering intention of a “deedless deed” or a kind of nontransferable gesture is the cultural capital of a poem, a poet. Niina Pollari’s Dead Horse gives a kind of evidence to the human condition—gives audience to the deed of living and the manifold misdeeds we are born into—“etc., etc., etc.”

Douglas Piccinnini was born in New York City in 1982. His writing has appeared in Antioch Review, Diner Journal, Jacket, Lana Turner, NYTimes.com and, The Poetry Project Newsletter—among other publications. He has been awarded residencies by The Vermont Studio Center, Art Farm in Marquette, NE and, The Elizabeth Bishop Society of Nova Scotia. In 2014, he was selected by Dorothea Lasky as a winner of the Summer Literary Seminars. He is the author of the forthcoming novella, Story Book (The Cultural Society) and collection of poems, Blood Oboe (Omnidawn).