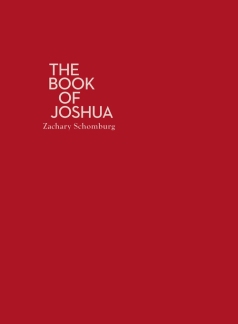 Birds. Horses. A boat. Blood. The color white. A telephone.

These and other recurring motifs and objects make up The Book of Joshua by Zachary Schomburg. It is a strange journey indeed; beginning in the year 1977 and moving through 2044, the first two sections titled Earth and Mars are prose poems with only the year as title. Schomburg was born in 1977 and the third section of lineated poetry, Blood, begins on page 77. This most likely is not a coincidence as numbers are important to the book, however, only 67 years elapse in book time (though the final section does not contain years or individual poem titles).

I bring these points up to note the meditative quality of the poetry. Moving as if through the speaker’s life and to a possible future, Schomburg questions himself, his place in the world, and what is expected of him through the birth of himself/Joshua and his maturation. 1981 has the speaker slowly growing:

While the speaker (who is possibly an avatar of Schomburg) and Joshua appear to be the same person, it is debatable. We can assess the similarities to Schomburg’s life (or time of existence), the fact that a character known as the Woman is writing The Book of Joshua in The Book of Joshua, or that The Book of Joshua in the Old Testament or Hebrew Bible is attributed to Joshua but most likely has several contributing authors. Arguments could be made for all three and perhaps other interpretations. Suffice it to say, the book is an amalgamation of various sources and ideas.

According to The Poetry Foundation, Schomburg himself wants his poetry to “generate…energy through confusion…in an emotional sense.” This is true of the book; strange things happen that the reader must grapple with: Joshua comes into being from the speaker’s throat (spoken into existence), the speaker makes himself/Joshua into a machine (much like our bodies mechanically regulate our temperature, blood flow, etc.) so that he can talk to him(self), travels to Mars, swims an ocean of blood, births his own father, and plays the game Family (like how we interact with our families). Yes, this sounds confusing, but ultimately it isn’t narratively confusing. It allows us to emotionally consider our lives, what we’re doing with them, why we act as we act, what it means to say something, and that we keep looking for something even though we don’t know what it is.

I think it’s important to look at an entire poem like this to understand the movement of the work: how things grow and shrink, questions are asked aloud and of the self, feelings are considered and communication and place are questioned for their validity. Dreams and nightmares clash in the speaker’s mind as reality and emotional identity are pursued seemingly through funhouse mirrors. Think about it: we go to carnivals and pay money to look at ourselves in variously-shaped mirrors. Certainly it is fun, but it also is a way we can be something else for a moment, or think we look a different way than we look. Are the mirrors in our homes (flat, regular mirrors) really telling us the truth when we look in them? Isn’t it strange how we can look smashing in one photograph and awful in the next? Schomburg takes us to this existential realm and allows us the opportunity to look at himself/Joshua/ourself. We can ask hard, emotional questions and decide how seriously we wish to consider answers.

I’ll admit the first time I read the book and arrived at the third section I was nonplussed. An immensely engaging story has been going on for 70-plus pages and now I’m confronted with line breaks and lots of white space. Much of these lines repeat what has happened in the first two sections and I was lost. This is part of the point though. In life, just as we begin to think we understand something, find a rhythm, get comfortable, something changes. We think back over what has changed and try to pinpoint what we thought and felt about the events preceding the change and we come up with fragments of thought, a distorted reality. Often we mull these fragments over and over in our minds before arriving at a somewhat abstract conclusion. This is what the last section of the book enacts as form:

Many of these ideas are all ready in our mind because we just read them. They return here in a different form and elicit different meaning with line breaks, white space, and brevity that make us take more time to pause and consider them in relation to their previous meanings. Time changes things or things change over time. We alter our understandings and make new connections. Joshua is the speaker is Zachary is me and you. Is robotic. Is equine. Is creating from the mouth and bird bones. This is definitely a trip, moving through the solar system and our blood stream simultaneously, issuing from mouths and entering ears, creating a new planet that is this same planet, learning what to do with our bodies and minds and importantly asking our emotional selves how we feel and that we do. I think you should get in the spaceship. Think you should go read this book.

Matthew Schmidt studies English at The Center for Writers, The University of Southern Mississippi.

I’d never been to the 8th House before—I didn’t even really know what it was, before I read this book. Or rather, I knew it but didn’t know its name.

The 8th of the 12 houses in Vedic astrology is not where you would want to live, but it’s essential to occupy and have occupied it: the home of life, death, and rebirth. You emerge from it bloody and tingling. Not renewed in any traditional sense, not absolved, not any of the adjectives we might associate with being reborn, but with eyes burned/aching, you come out “SHINY AND DISLOCATED AND GRATEFUL.”

Feng Sun Chen’s latest collection of poems traces an enclosed space of intimacy that invites you in—not like sex (though there’s sex here, too) but primarily like inhabiting/invading the wet cavities of a massive, contaminated body in a darkly domestic and sincerely spiritual way.

The speaker is equal parts human and animal, stupid and divine, full of longing and compassion, grieving the dissolution of the self that can only express itself in failed dualities and broken language(s). Thoughts are de/formed through the language that births them, already dumb translations from another realm into the sphere of the mouth, tongue, breath, utterance. The speaker asks, “Is it because we have two eyes that we can only see two things?”

From the first long poem “[I AM THE MIDAS]”, with its initial six pages SHOUTED as if from a splintered dais in some hyper/surreal amphitheater of cruelty, Chen stumbles into sudden possession of revelations.

I SUDDENLY THOUGHT I HAD GIVEN BIRTH

Nascence, or the need for it, is at the core of many of these poems’ energy—both the unbearable emptiness of “epidemic” infertility, and also the frightening and beloved fetuses that can’t or won’t come, the lost Suns of “mary”. There’s a sense here of the utterly impossible task of either forming or being a perfect body.

I am desperate for a fetus.
To be a soft stomach bloated with sea life
cannibalistic like a virgin.
I will walk on the black shore with my child
still shiny with mucus and blind

The speaker’s drift across registers and spiritual states ranges from the corporeal Peg to the transcendent mary, with many others in between. Peg/Peggy is never fully revealed or explained, but reminds me of the dead pig tree and “I’m OK, I’m Pig!” of Kim Hyesoon, the only person Chen directly names in her acknowledgements. Her references to the little Pegs carry in them a deadly serious joke on the nature of consciousness and communication, and what it means to be a gratuitous human. Pegs/pigs are sentient, except as pork, and in both forms make repeated appearances throughout these poems.

Peg becomes a surface where Chen carefully stacks some of her most allusive linguistic pick-up sticks. But even her LOL non-sequiturs and base puns are more than just punchlines; they’re another kind of rite.

I am a Peg when I copulate.
It is difficult to be sincere while Pegulating.

The shame of both animal urges and human sentiment—of the drives to eat, piss, and screw; and to love, be loved, remember, and pray—is another major emotional project here. The speaker often confesses to feeling ashamed, but it’s a fearless shame without embarrassment.

In this spiritual logic, bodies “belong to evil, cruelty” and only “the ways our bodies are broken belong to us.” So disease is proof of self, though it is a contaminated self. And good doesn’t lie inopposition to evil here, but next to its sister in suffering, who deserves our compassion.

After so long, I believe in demons because I saw one.
It was weak from pain, a universe of pain
lying next to me.
I felt for it
and stroked its face.

Another of the speaker’s modes is mary, a name almost a reference to the Holy Mother, but which mostly flattens to a common noun, which is always just out of reach, being reached for and missed. Yet strangely, these moments are some of the most devastating and disarming for me. While the animalistic Peg seems like it should be easier to touch, it feels more distant than the abstract and agonizing quietude of mary.

Suddenly I have insides that have contacted me, they say mary
*
mary slipped through my fingers
dried into gray crust.

Also present here is a shade of Aase Berg’s “black shell” from Dark Matter: a calling of names and feeding of bodies into machinations of history and death. Only this is a kind of modified death, death with a prefix—superdeath, maybe, or psychedeath. Uncannily cute drawings of little maggots clump on the pages and cover, plus a stray fly or two (art by Josh Wallis). The maggots remind me more and more as I read of miniature dumplings that I want to pop into my mouth, because in the emotional logic of these poems, consuming is similar to praying—an act as embodied as it is transcendent. It’s in the fat of the pork, which is both salvation on a cellular level and a ritualistic return to the fucked-up stupid joy and terror of being a person. It’s pure, even in its gross impurity.

All I wanted, I still want.
I still want to be filled with the richest light.

These are poems that will pierce and rupture your mental plane. Its sun will shine light on the blood it draws. Immaculate porcine ghosts and black angels will haunt you. This is a calling out, and despite the speaker’s resignation, or her insistence that, as a poet, she has no historical power, she is not powerless. Her insides are contacting you and sending you an urgent message. Listen. You can laugh, but in laughing wonder what you’re holding back.

J. Fossenbell lives in Minneapolis, where she reads and writes poetry and stuff, and teaches fresh snowmen to stop making sense.