Not too long ago, I announced on Twitter that I would like to do an interview series wherein I asked people I admire to recommend an “experience.” I would then attempt that experience, and we would talk about it. I was joking, but also serious. Elisa Gabbert is an incredible poet and human. She’s also very good at Twitter. When she said she would be game for something like this, I set to work immediately.

Elisa recommend a wine tasting, which I found both exciting—an opportunity to drink for work—and curious—of all things, why a wine tasting?

I tried to attend a few wine tastings in San Francisco (by which I mean, if my wife and I were walking down the street and we spotted one taking place in a wine shop, I would say, “Hey, let’s drop everything and go to that wine tasting.”), but it didn’t pan out. Or not until we received an invitation from my in-laws to join them at a time-share in Angel’s Camp (near Russian River, CA).

Part of our visit was to include a wine and food pairing at the Kendall Jackson Winery.

We ate several little bites and drank about five glasses of wine, which we scored on little Kendall Jackson notecards. 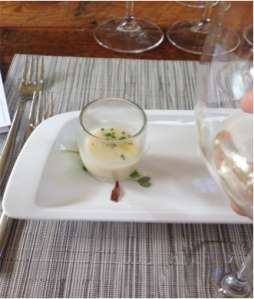 Then I talked to Elisa Gabbert about it.

CW: Elisa, you recommended a wine tasting. I tried to go a few times in SF, but it didn’t pan out. Coincidentally, my in-laws invited us to meet them at their time-share the other week, and they brought us to a wine and food pairing. Does this count, in your opinion? Did I come close enough to the experience you were recommending?

EG: Some people taste everything that is being described purely due to power of suggestion. Others don’t taste anything that is being described and think it’s all mumbo-jumbo. I look at it like this: different wines definitely have distinct flavors. If you haven’t tried a lot of different wines or just haven’t been paying very close attention while you’re drinking them, you’re not going to notice all the different flavors. An “expert” like a sommelier will probably be able to point out some interesting flavors that you’re not noticing. But they’re not necessarily the only flavors or the most interesting flavors, they’re just the flavors that person happens to notice (or, if they’re selling the wine in question, maybe the flavors that the marketing department has decided to highlight). So if you taste something different from the person leading the wine tasting, you shouldn’t feel like you’re tasting it “wrong.” The idea is just to pay more attention to the different flavors in the wine. A professional might describe something as grassy or “barnyard-y” while you think it smells like hot dogs. I’ve had wines that taste like hot dogs or a cedar chest or even buttered popcorn. It’s all admissible, you just have to trust your own nose/tongue/mind.

CW: You’ve had wine that tastes like hot dogs?

EG: Yes. Truly. It was a red wine with a kind of smoky cured meat taste. This was at a party and I remember taking the cup around to people and saying “Doesn’t this smell like hot dogs?” On a side note, pinotage usually tastes like bacon. (I particularly liked buying pinotage when I was vegetarian.)

CW: Is it bad form to bring a “party vibe” to a wine tasting?

EG: From the perspective of the people holding the wine tasting, probably. But from your perspective, who cares? You’re partying!

CW: At the end of our wine and food pairing, I started to think, this is basically an advertisement for Kendall Jackson wine (the winery my in-laws were able to get free vouchers for). But it’s an incredibly expensive-seeming and elaborate advertisement. Is it worth it? Is there more to it than advertising? What is the purpose?

EG: Yes, in this case, you basically experienced advertising. But this seems like a very reasonable form of advertising to me. They assume that once you taste their wine you’ll want to buy some. It’s like giving out free samples at the grocery store. It’s not really as expensive as it seems because they sell the wine at a markup, so if you buy some wine they make their money back pretty quickly, even if not everyone who tastes the wine makes a purchase.

I took a wine tasting class in college that was taught by a guy who wasn’t affiliated with any particular winery, so we tasted stuff from all different labels and there was no advertising component involved. That’s obviously the best way to learn how to taste wine.

CW: Do you think police ever park their cars near wineries and pull people over as they’re turning out of the driveway and ask, “Excuse, ma’am or sir, have you been drinking?”

EG: Wow, that would make a lot of sense. You can get pretty drunk at those things.

CW: Do you go to a lot of wine tastings?

CW: Do you think it would be rude to admit to someone hosting a wine tasting that were only there for free wine?

EG: I bet they get that all the time. I used to live near the Sam Adams brewery and they seemed fully aware that people only did the brewery tours to get drunk for free in the afternoon.

CW: Did their brewery tours get rowdy?

EG: Yes, but rowdy in a fun family way. I never saw any fights break out.

EG: As I mentioned above, I think a lot of people really do taste the cat urine or whatever – or believe that they taste it, which is effectively the same thing. I mean, a man might not want to know that his wife is faking her orgasms, but if she really believes she is having orgasms, what difference does it make?

CW: But if she believes she’s having the orgasm, who would be the one designating the fakeness the husband wouldn’t want to know about?

EG: Now we’re getting into some deep philosophical shit, but some people think you can believe you are happy but not actually be happy. Others would say if you believe you’re happy, you’re happy; there is no other measure of happiness. (I don’t know what I believe in this regard.)

EG: I would guess that people fall in love at wine tastings all the time. Wine country is pretty romantic.

EG: I went to a wine tasting in Massachusetts around 2005 or so, with some girlfriends from grad school. Massachusetts isn’t exactly known for its wines, but this winery had pretty good sparkling wines. The woman leading the testing told that us that good sparkling wines often have “toast” notes. Everyone said, “Oh yeah, this does smell like toast!” I’m not sure if it really smelled like toast, but I’ve always remembered that. Maybe because of the pun.

CW: Is there any chance she was just making a joke?

EG: She didn’t seem that clever.

CW: Do you think studying wine in this way has allowed you to appreciate it more when you drink it alone at night with a sad record on? Or over dinner with a loved one?

EG: Yes, absolutely! But, luckily, I haven’t become so wine-snobby that I don’t still enjoy cheap, simple wine too. Also, though I drink wine with dinner, I don’t usually think wine and food improve each other. Every now and then you hit upon a lucky combination, but most of the time, I think food makes wine taste worse.

EG: It’s definitely up there. I also like bourbon. And margaritas.

CW: Can you share an anecdote from a wine tasting experience in your past?

EG: In my wine tasting class in college, we tried a sauvignon blanc from New Zealand that tasted exactly like Five Alive. Remember that stuff?

EG: It was delish! Way better than plain OJ.

CW: Have you ever had Kendall Jackson wine?

EG: I find KJ chardonnay to be reliably drinkable.

CW: Do you notice anything strange about this bottle of Kendall Jackson wine?

Elisa Gabbert is the author of two books of poetry, The Self Unstable and The French Exit. Follow her on Twitter at @egabbert.

Colin Winnette is the author of several books, most recently Coyote, forthcoming from Les Figues Press in January 2015. Two Dollar Radio will release his novel Haints Stay in June 2015. He lives in San Francisco.