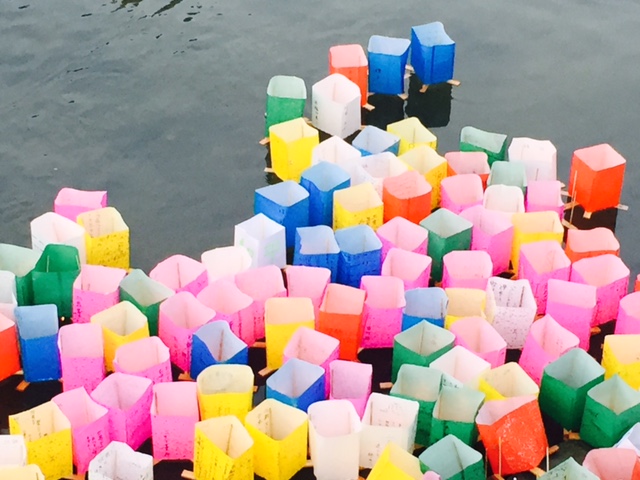 [This essay coincides with the publication of this month’s special Hiroshima-Nagasaki issue of Evening Will Come edited by Brandon Shimoda. April Naoko Heck’s poem in that issue can be found here.]

My great-grandmother on my mother’s side is a hibakusha, a survivor of the atomic bombing of Hiroshima. I was born in Tokyo and lived in Japan until I was almost seven, but I’ve never been to Hiroshima until today, August 6, 2015. I’ve arrived midday from Kobe, where it was also a sweltering, muggy 95 degrees, the heat index over 100. The Peace Memorial Museum lobby is perhaps not much cooler and packed with tourists. I pay 50 yen (less than 40 cents) and am slowly herded with the bustling group past the ticket booths and toward the exhibit space. We are shoulder to shoulder, camera to camera. We shuffle through a warm airless passage, then turn left into a hallway lined with mural sized photographs. The iconic mushroom cloud. A rare photo of victims pictured just hours after the explosion. A cityscape demolished, a field of rubble, and here and there a partial wall or bit of foundation standing. We inch along, fanning ourselves with maps, brochures. Smart phones are held up, silently snapping photos of photos. We turn right. A life size installation of victims, like figures in a wax museum, skin shredded and melting off their limbs, their mouths open. I glance and look away. A tall western couple beside me talks loudly. “The thing a lecture can do,” the man expounds, “is ask the right questions. And instead of arriving at the same conclusions again and again, it lets the people decide. . . .” Is it the graphic museum display or the heat or his narration being forced upon me that starts my heart pounding? Blood rises to my cheeks and I stop walking, let them pass by me until they’re out of earshot. Suddenly I’m claustrophobic and furious. I’ve traveled thousands of miles to be here, to honor my great-grandmother, and I only want to leave. I storm through the crowded exhibit halls and rooms until I find a clearing near the exit. Now the photos on the walls depict U.S. and Japanese officials shaking hands. Seventy years and 140,000 lives flashed by in 5 minutes. I skip the gift shop (gift shop?) and search for a cold drink of water.

6:30 pm. Crowds of sweaty people line the park’s bridge and riverbanks. We are here to observe the annual ritual of the lanterns being sailed down the river. For 600 yen, you can visit a booth and get materials to build a simple lantern–a rectangle of bright colored paper, some sticks, a candle. You can write a message on the paper if you wish. Beginning at 6 until 9, the floating lamps are released into the water.

There’s barely room now on the grassy bank to see. I elbow in to take photos. The lanterns are sadly clumped together along one bank, pinned there by invisible currents. Slowly the newly released lanterns bob and float toward the mass and become stuck there. Some have flipped over sideways or upside down, submerged in water. Some are moored on rocks along the bank, torn and tangled in a criss-cross of sticks and soggy paper. Some candles’ flames are extinguished, others remain lit as the hazy daylight begins to dim. I am shooting photos and waiting greedily for an epiphany, to be carried away by a wave of emotions. Instead, my thoughts are prosaic, dulled. Someone steps on my foot. Someone’s posterior has accidentally taken center stage in my photo frame. The hot buzz of cicadas, the clash of pink and white and yellow faces of tourists craning to see, the rainbow lanterns clumsily bumping along: What a holy mess. History is a mess. Art is a mess. The river is a mess. I’m hungry and Google “best ramen Hiroshima.” What would my great-grandmother think? I rationalize that all parents simply want their children to be happy, and perhaps I can honor my family by seeking joy in a bowl of tsukumen, cold noodles and vegetables dipped in spicy broth. I want to eat and go to sleep. 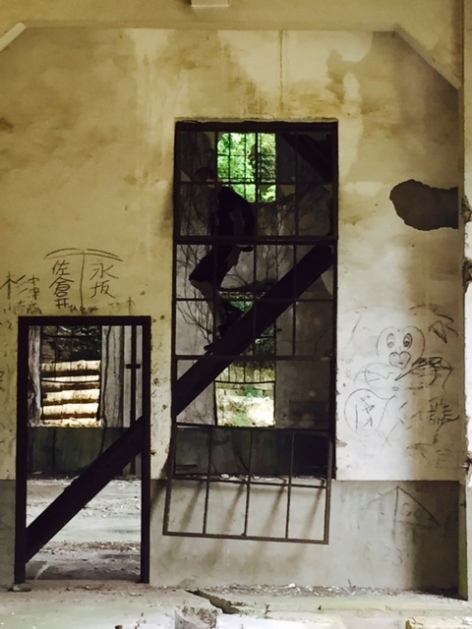 August 7th. Okunoshima Island. Also known as rabbit island, once a military site for experiments in mustard gas. Legend goes that the test subjects were rabbits, and once the war ended the lab workers set them free. In the warm climate and without predators the creatures multiplied like, well, rabbits. The island is about four and a half kilometers in circumference. No cars are allowed. The island has a small camp ground, pleasant swimming beaches, and a modest hotel. A ferry transports visitors between the mainland and island, mostly Japanese families with young children. On my boat ride I notice more than a few grandparents along for the trip, and here and there a gathering of giddy high school aged girls. 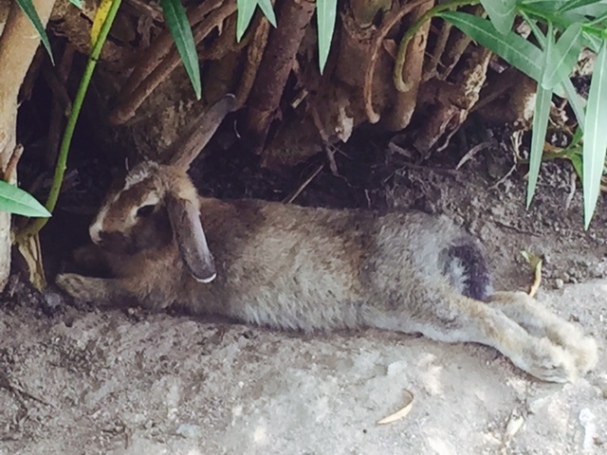 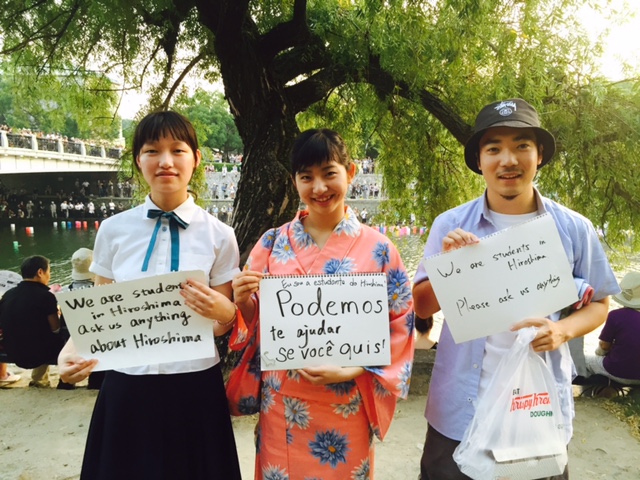 The moment we step off the ferry fat rabbits hop toward our feet and look up expectantly. I’ve brought shredded cabbage I nipped from my hotel’s free breakfast buffet. I feed the rabbits, their fur deliciously soft and feather-light to touch. Under the palm trees children with round straw sun hats crouch and squeal and hold out carrots and leaves. The adults cannot help but smile. With the sun beating down and clear blue green sea lapping the shoreline, the islands dark history is easy to forget. Remains of the military building and battery are marked sights along the easy walking path that circles the island. But the charm and surprise of rabbits are a distraction from the skeletons of war, and allow us to spoil–and be–children for a day. Nature’s transformation of evil to happy accident is what I was looking for, what I could not discover in a museum, what I could not plan for in my trip’s itinerary.

April Naoko Heck was born in Tokyo and moved to the U.S. with her family when she was seven. A Kundiman Fellow, she has been awarded residencies from the Virginia Center for the Creative Arts and Vermont Studio Center. A Nuclear Family, her first collection of poems, was released by UpSet Press in spring 2014. She is currently writing a novel inspired by her college summers spent living and working in an amusement park.