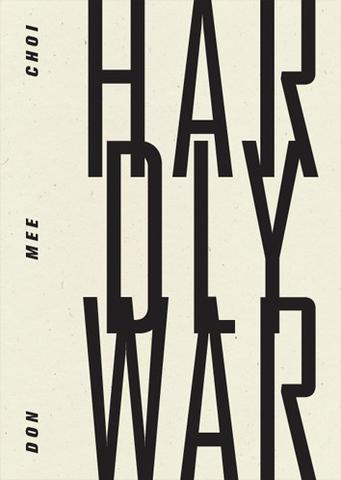 Don Mee Choi’s Hardly War opens with an essay: a preface, a letter to Choi’s readers. Choi grounds us right away, explaining, “I was born in a tiny, traditional house, a house my father bought with award money he received for his photographs of the April 19, 1960 Revolution.” This house in South Korea is her “psychic and linguistic base, a site of perpetual farewell and return, a site of [her] political act—translation and writing” (3). Using this house as her point of departure, Choi then propels us forward into the book and its state of “perpetual farewell and return.”

This preface works as a map. Soon after, the book’s poems begin to dissolve and crumble, as though the map’s edges are slowly burning and curling in on themselves. The book moves into prose blocks, slowly thins into more lineated poems, and finally ends with an opera based on interviews she conducted with her father about his war experiences.

Choi’s Hardly War thus defies genre. The book is part poetry, part memoir, and part documentary/collection of physical artifacts. In her opening, Choi tells us, “I am trying to fold race into geopolitics and geopolitics into poetry. Hence, geopolitical poetics. It involves disobeying history, severing its ties to power” (4) Later on, in one of the book’s most devastating lines, Choi writes:

This moment speaks to the heart of this collection: a complex exploration of both the speaker as an individual subject and as a part of a much larger inheritance. As her speaker grapples with understanding her paternal lineage and her cultural heritage, Choi’s book asks what it means to inherit war. At the same time, this book asks how the memory and conception of war is controlled and manipulated by U.S. culture’s violent need to forget, to erase, or to entirely ignore its history. Choi tells her readers that the lineage of war is the world’s lineage, and that the lineage of war belongs to all of us, either as the survivors or the oppressors or both.

Choi expresses this idea of “forgotten” wars and history with the book’s title, which also repeats itself throughout the book. Choi’s poems begin with the lines:

It was hardly war, the hardliest of wars. Hardly, hardly. (6)

On page 12, she adds, “It was partly history.” These refrains express and bitterly mimic the ways in which U.S. culture has minimized, silenced, and erased the Korean War, as well as other aspects of its violent relationship and history with South Korea. The refrain of the story being “partly history” or “hardly war,” along with the rest of the book’s language play, quickly becomes uncomfortable. And this discomfort becomes a way to better understand South Korea and the speaker’s reality and history. Choi’s speaker desires to prove an existence—both her own and an entire history’s.

The book’s linguistic experimentation mirrors the ways in which we repeat ourselves, internally or externally, as we struggle to remember or understand. In “1950 June 28: The Fall of Seoul,” Choi writes, “I was cheerily cheerily red and merely merrily washed my face in the yard and looked up the stairs…No one was on the road, so I ran really readily red, are you really red?” (11). This repetition is also eerily at odds with the poem’s violent subject matter concerning North Korea’s invasion of South Korea. Here she creates a singsong voice that feels true to how we think about memories—usually in a circular, stuttering, and uncertain way.

At other times, the linguistic experiments express the speaker’s painful awareness of the limits of her exploration. In “Neocolony’s Colony,” Choi writes:

Later on, Choi tells us that as a child, she believed “that the people and things that [her] father photographed followed him and lived inside his camera” and that she, too, wished that she “could follow [her] father and live inside his camera” (49). Thus, the book contains a grief that is both chaotic and quiet: the speaker’s ache for a deeper understanding of her father, his absences when she was young, and the importance of his work.

Hardly War’s endnotes are just as important as the book’s main text, and perhaps even function as poems themselves. Choi draws from her father’s photography, fragments from war documentaries, excerpts from her father’s writings and his letters home, notes from her time at the Henry Art Gallery in Seattle, and countless other artifacts, all of which she explains in her endnotes. I found myself flipping rapidly back and forth between the endnotes and the main text as I read. This flipping back and forth to look for information, this desire on the reader’s part to understand is a crucial part of the book and its reading experience. Choi’s speaker is attempting to makes sense of history and her identity, and we attempt to make sense of it alongside her.

Choi’s opera, which closes the book’s main text, ends with the lines:

This moment reveals one of the speaker’s most important desires—to discover the truth about her father, herself, and a piece of history. Additionally, because Choi’s readers know that the truth is not at all simple, the understatement of “a simple truth” stresses the history’s complexity. Choi succeeds in the goal she sets in the book’s preface—to disobey history and sever its ties to power—by revealing all of this ugly complexity.

Ansley Clark teaches creative writing at the University of Colorado Boulder, where she recently received her MFA. Her poems have appeared in or are forthcoming from Columbia Poetry Review, Typo, Sixth Finch, DIAGRAM, Black Warrior Review, Denver Quarterly, and elsewhere. She is the author of the chapbook Geography (dancing girl press, 2015).