Ashagalomancy—this is one word you won’t find the Oxford English Dictionary, or any other dictionary, for that matter. But you don’t have to do a whole lot of internet sleuthing to find that the word ashagalomancy is closely related to astragalomancy—the high psychic art of divination cast from throwing die. Ashagalomancy, however, is divination drawn exclusively through animal bones.

The poems of Abraham Smith’s Ashagalomancy are just that—divinations. Divinations from a throw of animal bones?—kind of, in that each poem begins with a metaphoric tossing of bones: each poem begins with the phrase, “IN THE OLD DAYS” (that tried and true, age-old kindling for a good long story) followed, in the same line, by an apostrophe to some wild creature: an owl, a cicada, a vulture, a blackbird, etc. Once the bones are cast, and our clairvoyant’s motor revved, the reader rolls like a runaway freight truck down the most drawl-addled shag a shaggy dog story could compose itself of:

That Smith foregrounds the animal invocation (here, the sandhill cranes) is no coincidence. The creatures perch there, static, throwing from their idyllic bodies only indistinct shadows down to the earth, where they become the anthropomorphized haunts (or shag) of the speaker, a speaker who could only be likened to a sort of southern gothic Mad Hatter, one who domesticates those haunts with a series of home-cooked/half-baked creation myths. The new myths become Smith’s way of reviving the creature, dragging it—and all its symbolisms and connotations—from its “OLD DAYS” into the modern world.

This takes some meandering, and the readers of Abraham Smith’s Ashagalomancy need to feel at ease with that—why shouldn’t they? Divinations are rarely prized for their clarity, but for their interpretive deviations, the wiggleroom they allow their auditor. But that doesn’t mean the diviner takes a backseat to these poems; on the contrary, the diviner is very clearly rattling the bones:

These moments of pathos are refreshing, especially alongside Smith’s contorted language, and reveal that beauties and archetypes of “THE OLD DAYS,” while perhaps outdated, need not necessarily evoke degradation. Indeed, they are elements of our living environment—physical or cerebral—that have touched us and made us their product. At the same time, that environment is also the product of us. Smith does not ignore this dialogue:

While comparisons between a fly and a zipper, the natural and the man-made, may appear—initially—inconsequential, Smith reminds us: “it’s the incidentals are monumental.” If we can remember that the natural world and the man-made world are equally malleable via perception (or, mythmaking), it becomes possible to embrace responsibility for both.

Better, then, to embrace the dialogue between the natural and our made environments: a coyote’s yowling at the moon as “a chainsaw laughing backwards to strop my light to this curled world” or the cluck and tweet of chickadees reflecting “a yellow lower on / that bird say it with me / time is pee yellow is hello.” The language in Ashagalomancy simultaneously exalts and denigrates our archetypes and idylls, our “world…filled / with gorgeous excuses” by boiling them down to their colloquial refuse, their rhetorical after-burns, their smolderings, their slag: 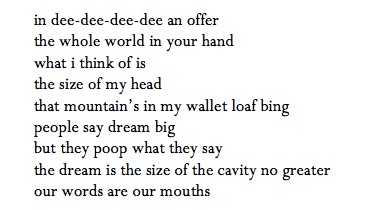 It’s as if Ashagalomancy’s ethic is couched in the turning of phrases itself. At times, the poems read as though they are on the brink of falling victim to their own discursiveness, reaching near-exhaustion by their excessive trail blazing: “It seem all i can do is say the same old beautiful thing cheek kiss words.” Or, they are discouraged by the motor itself: “the only reason we think sometimes more deeply than bears / is flyswatters.” But because the shag of the dialogue never ends, there remain possibilities of revival.

This is where Smith’s conception of our relationship with nature, both as product and producer of, becomes important. If language allows us to disfigure the landscape, Smith reminds us that it allows us also to reconfigure and revitalize—thus, his justification for mythmaking. Of course, this mythmaking is a double-edged sword:

Just as myth can clarify, it can cloud. What Smith’s Ashagalomancy makes abundantly clear, however, is that behind every myth, there is an emphatically unique human agency that should not—and perhaps cannot—be forgotten.

Jake Syersak has an MFA in Poetry from the University of Arizona and is currently pursuing a PhD in English and Creative Writing at the University of Georgia. His poems have most recently appeared or are forthcoming in Colorado Review, Hayden’s Ferry Review, and Yalobusha Review. He edits Cloud Rodeo.