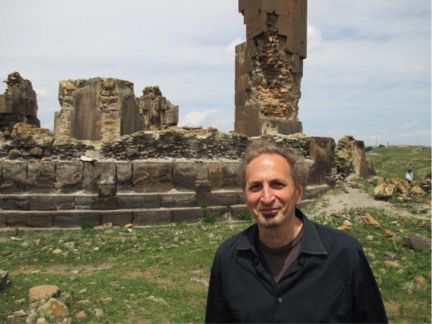 Balakian at the ruins of the Armenian medieval city of Ani.

Peter Balakian has graffiti-tagged the space-time continuum and we would do well to keep the atmosphere stocked. His latest poetry collection Ozone Journal (The University of Chicago Press, 2015) breezes across the “static sounds from Comiskey and Fenway” circa 1961 with layovers in Haiphong Harbor and Teheran before arriving in the New York City of thirty years ago, leaving no Reaganism, Tribecan or epidemic unturned.

Jon Riccio: There are historical events, then there’s history itself, a subject addressed throughout Ozone Journal in such passages as “I could hear the end of history/ in the teeth rattling inside a gourd,” and “I was beginning to see history/ as images filtered through cracked glass.” Did putting the concept into tangible items make a more cohesive anchor for the book?

Peter Balakian: There are moments in poems where macro perceptions occur; moments when you get a jolt about an epistemological or cosmic reality; “seeing history” in these poems you mention is one of those jolt moments for me—a moment of heightened perception about something large.

PB: The characters in my poem are evincing something about the complexity of reading a poem. We all know that there are many ways into a poem and that a poem is a complex work of imagination that demands we read it from various perspectives. Formal and aesthetic dimensions are always the center of the work and we must go there first—that’s how the work came into being. But, various historical, cultural, and biographical contexts, when unearthed with care and brought to the poem with precision, can open up the work in important ways. The dialogue in my poem about Hart Crane tries to bring these issues into some conversation.

JR: I’m drawn to Ozone’s glimpses of the scientific, a few examples being “the lidocaine of the morning air,” “the nanoparticles of spray-can mist” and “T cells floating in the elevator at Saks,/ spikes of protein/genome invasion.” Has this always been a facet, or is it something that subconsciously found its way into your writing?

PB: I’ve always wanted to open the poem to everything possible in the realm of knowledge, ideas, experience, etc. When I was younger I was focused a lot on the body and its anatomy. Over the years, probably since the late ‘80s I’ve been interested in wrestling with dimensions of technology, digital culture, and especially the realities of our screen-age from TV to computer to cell-phone screens. Screens find their way into my poems because of course, this is a primary mode of consciousness and perception of our age—starting with mid-20th century TV culture. My recent books Ziggurat and Ozone Journal are engaged with various dimensions of science, from physics and the archeology of artifacts to AIDS and the erosion of the ozone in our age of climate change and ecological disaster.

JR: The titular poem is divided into 54 sections, while others range from three to 12. When do you know a section is complete?

PB: Writing in longer forms engages me in another kind of rhythm; you have more space to work lyrical language and create planar juxtapositions and metaphoric shifts; you have room to layer the experience of the poem more richly. Each section is in conversation with other sections in the poem, and I’m trying to find the rhythmic and conceptual moment when the right realization has been achieved.

JR: “I was held together by tranquilizers and the weft of a prayer rug” (the first line of “Providence/Teheran, ′79”) succeeds in its beauty and frankness. What’s the most memorable advice you’ve received about beginning a poem?

PB: I can’t say I recall anyone ever giving me advice about opening a poem. My sense of the opening is driven by the rhythm of the phrase and how interesting or energetic the opening line or lines can be while at the same time being right for the poem.

JR: Buddha, Joe Louis, Khomeini and Calvin Klein – not your everyday poem occupants, though they manage the Ozone with aplomb. What are the pros and cons of attaching recognized names to the work? Is there such a thing as too much celebrity-lending in the written word?

PB: My engaging those figures and others in my work is not about using celebrity; those figures are just parts of various cultures that I’m interested in writing about – religious ideas, America during the Jim Crow era, contemporary America, etc. I have a broad interest in culture and I suppose here Whitman, Yeats, Auden, Robert Hayden and Adrienne Rich would be the kinds of poets who have inhabited these zones in their times. I suppose the issue of how grounded in culture can a poem be and be interesting to future generations is always at stake in this conversation. But, I would note that we still read Whitman’s “When Lilacs Last in the Dooryard Bloom’d,” Yeats’s “Nineteen Hundred and Nineteen,” Auden’s “August 1, 1939,” Rich’s “Planetarium” or Hayden’s “The Middle Passage.” Homer and Dante give us plenty of culture and history in their poems.

JR: The second tercet in “Baseball Days, ′61” closes with “Kennedy’s hair blew across the screen. Castro was just a sofa.” A great moment in furniture poetics, for sure. How did you arrive at this image?

PB: Remembering the TV screen of 1961 brought me those images. Kennedy’s face is obvious, but I guess the reader would have to know that a company called Castro made a much advertised pull-out sofa in the ′60s. But, the pun and double-entendre (Fidel Castro) is also, I hope, comic and engaging for the reader.

JR: I attended your lecture on Moby Dick at the Colgate Writers’ Conference. What are Ozone Journal’s Melvillesque qualities, if any?

PB: Melville will always embody the ideal of an expansive reach of linguistic density and opacity. He will always embody the ideal of fusing the sensory and sensual with a reach for the metaphysical and for the domain of ideas. It’s not for me to say what might be Melvillian about my book, but these aspects of Melville’s sensibility are always prodding my head to go for as much as possible.

JR: I admire the conventional turned on its ear, hence my double underlining of the phrase “anthropology’s shakedown” in “Slum Drummers, Nairobi.” What are the best possible outcomes of this, and who should do the shaking?

PB: Again, I’m not going to do a reading of my poem, but I would just note that that image suggests something about what anthropologists do, how they critique, how deep inquiry can radically alter how we see and understand the world, how we come to have knowledge. In the poem, it’s my daughter Sophia, who is fact an anthropologist, who is leading me forward to see things in fresh ways.

JR: Your book begins with a devastator and a sparrow. It ends on “a subway station sliding into water.” How do you equate dichotomy with destination?

PB: Human experience is full of paradox and complexity, full of colliding strangenesses— and in some ways those are our destinations.

Peter Balakian is the author of seven books of poems, four books of prose and two translations. His book of prose Black Dog of Fate won the 1998 PEN/Martha Albrand Prize for the Art of the Memoir. The Burning Tigris: The Armenian Genocide and America’s Response, won the 2005 Raphael Lemkin Prize. He is the Donald M. and Constance H. Rebar Professor of the Humanities, Professor of English and Director of Creative Writing at Colgate University. His new book of essays, Vise and Shadow: Essays on the Lyric Imagination, Poetry, Art, and Culture was just published by University of Chicago Press.

Jon Riccio serves as the poetry editor at Fairy Tale Review. Current and forthcoming poems appear in Really System, Split Rock Review, Futures Trading and Hawai’i Review, among others. He graduates in December with an MFA from the University of Arizona.