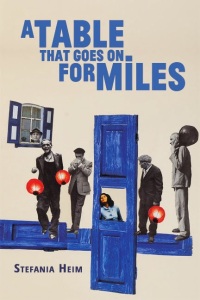 Attendance at a smorgasbord is liable to lead to gluttony. Sitting at Stefania Heim’s A Table That Goes on for Miles doesn’t lead to gluttony, or isn’t full of itself, or the smorgasbord is not the usual panoptic affair. In fact, this may be the reason the table continues—one thinks everything is available, in sight, and then realizes there is much more offered. It has to do with the approach Heim takes in her poetry; cerebral more than imagistic, sparseness where one would expect many more necessary words to produce the intended affect or situation. A nutshell might consist of: lonely, deliberate poems, austere and searching for meaning in the wake of childbirth. Nutshells are simplistic items though and this is a strange journey through balances in the poet’s life, or maybe how things can be seen as unbalanced, have gone awry and how. As seen in this opening paragraph, it is not easy to describe Heim’s first collection—it refuses easy confines.

For perspective, the book is situated around three recurring poem types/art. The cover and several pages surrounding the multiple iterations of “The Dream is About Us”, is courtesy Rachel Farbiarz. This artwork is all in black and white within the pages, but vibrantly colorful on the cover. As can be seen, realism is not the objective of the work; rather spatial relativity collides in a stream of dreamlike images. These pieces appear as if collaged and morph into something more than its components—the art lends a surreal quality to the words. From the first section of the “dream” sequence:

Attempted to pilfer the definition of homesickness.
Grass level, gentle slope. To those plagued by guilt,

may there be continuous planning
for the unimaginable. (21)

And what appears across from these opening lines is unimaginable: an old woman three-quarters encircled by flowers (somewhat like a halo, though the axis is two dimensional) with one flower over her loins. Similar to the cover, the reader should have planned for unimaginable poems and further art. Look at the first line of this poem though; it posits that the speaker tried to steal a definition. Earlier in “Misericordia,” Heim has situated the reader for this occurrence:

The country is only one language.

than we can imagine,
there is still one small, cream room.

Continuity plays a major role in this work. As the poems progress, so too does the reader’s knowledge of understanding the speaker. This country only has one language. There are other languages in the world, yet they are mostly translatable to English. Even though there are other languages and they can be translated, we (the people) have agreed upon definition. Does definition define what we attempt to communicate to each other? Heim believes it does not, that language is an inadequate way to confer feelings, emotions, reactions, or blame.

The third running sequence of poems, titled “Moving Picture,” is peppered throughout the book. As Heim states in the notes they reference and mix various films and texts. In answer to the aforementioned question, Heim gives us these examples or reinterpretations or emotional attachment as an audience member to a given work. She doesn’t simply recapitulate a specific story, but tells us how she interprets the tale, where her interest is. As these words don’t do justice to what she is doing, there is no simple way for me to state that where one is looking from the understanding is different. Heim knows the story continues, she’s aware of her “constant miscommunication” (79), and is still interested in working through the language to convey “A voice that thrills, a killing” (77). It’s the voice that knows how to put language together and push the message through the colander of distance.

This is a serious collection that deals with heavy topics. A cliché-like line like that is part of what Heim might call “retroactive inevitability” (9). I know that I feel that and thought it in my mind, but it’s been used so many times that it is not worthy of a book review. The freshness has gone and we’re left with pieces (words) to sew together into quilts (sentences). So, yes, this is seriously concerned with wants, relationships, motherhood, honesty, change (in a multiplicity of ways), fear, vagaries, guesses, will, and experiments. However boring that description is, Heim’s writing is that much sharper as in “Saturday, and Getting Colder”:

All my new estimates are proving to be right:
A life is as assembled out of thin

birch branches. Now you know
everything: I was unnaturally lit from within.

There,
that’s my handbag at the scene of the crime.

So, what is known and what is controlled? Are a woman and a man going to feel similarly after birthing a child? What is the plausibility of one thing happening? Would obsession obscure the aperture of the viewer? These questions and more are considered within the book. It would be easy for me to say I have the answers to interested potential readers, that I read the book and understood, or that I can’t really teach anyone anything. Yet, that would be the easy route. The route that I want to take is to say that I feel this is an important book. What I know is that Heim did not simply “box up what living deforms” (33), she has taken a journey and she has been shaken by it. Her shaking has shaken me. The quiver is still pulsing and the table is long and set for many people. You should join us at the table. The discussion is good, the poetry is better.

Matthew Schmidt is pursuing a MFA at the University of Arizona. His work has been published or is forthcoming in Asinine Poetry, Down in the Dirt and Eye On Life.