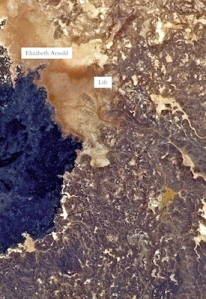 This is the quote that begins the longest and most significant poem in Elizabeth Arnold’s Life. Life is the third book in a (so far) three part series created by Flood Editions. The first two books, Civilization and Effacement, focus primarily on political borders and erosive disasters. In this third collection of poetry, we fixate on the interconnectedness of the world, of humanity through geographical, archeological, and infrastructural elements mentioned in the first two works, but Arnold’s labor is so much more than a series of poems. It is reifying, temporal, original, evolutionary, aquatic, constructed of rudiments which unite us all in this life:

everything there’s alive though carved,

the grave’s returning spirit
requiring the appearance of life

in order to be fed.

Arnold catapults us all over the earth; from Megalithic sites in Ireland, to Rome, to Mount Etna. In “Fontana dei Quattro Fium,” we observe the Fountain of the Four Rivers located in Rome, each river representing the four continents to which Catholicism had spread by 1651, the year of the fountain’s conception. Water, particularly rivers, serves as conduit throughout Life for linking humans to each other as well as the surrounding nature:

swerves past rocks it swirled,

slammed giant thumbprint-like impressions into
nobody knows how long ago,

More moving, is the physical language Arnold steadily employs. Her descriptions mimic the tectonics and erosion of a plane in constant motion, which moves persistently onward, anguine like a river, wholly unconcerned with the feelings of man, replicating the movement and very nature of life and death.

Arnold is not afraid to discuss the edgeless nature of life. In the poem “Osiris in Pieces,” we see the Egyptian god of resurrection, death and life presiding over past and present, the shattering of Memnon’s statue in two as the contemporary isolation between people in the same households, a cycle which resists diffusion on a global scale.

Regathered apart in separate cities
a thousand miles between

Going back to the Melville quote, there is mutual dependence in lack of socioeconomic boundary, in having naught (also a reminder that nothing is indelible). Without nationalities, religions, and other culturally defining modes what is there to squabble over? Often, we see the phenomena of communities coming together and people from all over the world helping perfect strangers after natural disasters with no monetary motivation.

Here, I am reminded of the great flood myth that pervades nearly every culture from The Bible to the ancient Greeks, the boundless erasure of earth and lines, an event that rendered everyone and everything the same. In this way, Life is a type of exegesis. Simultaneously, Life reads as a sort of neo-haibun akin to Anne Carson’s “Kinds of Water,” (a collection of thoughts in each city she visits in France and Spain that also, as implied by the title, contain themes of water flowing through it), historical walk-throughs and reflections that birth from travel.

Water is not only the source of life, but heavily associated with death as well, a duct which all lives course through:

So the mountain is sponge with
plenty of water for plant growth, little runoff.

What’s lost is lost mostly to the sea.

Antithetical life and death are never far apart in Arnold’s poems. She reminds us that we cannot have one without the other, that there’s no way to circumvent the candor of the earth’s cycles, a beast which has no regard for who we are or where we came from. We are all the same when entropy sets in. Life is a reminder of how ephemeral human time is:

Towns on the mountain’s slopes are
built of lava,

blue-black cinders near the mountain’s peak

where the
main science station stood

And yet, while we are all connected, we can only have a singular experience:

Painted on the inside of the lid of a coffin in Paestum, he was
diving into nothing all alone. To live is to die diving.

This poem is reminiscent of the Orson Welles idiom: “We’re born alone, we live alone, we die alone.” While this seems somewhat depressing, it really doesn’t matter what you or I feel because there is truth to this, and there is comfort in knowing that life goes on.

Life is available from Flood Editions

Liz McGehee is an MFA candidate at the University of Colorado Boulder.