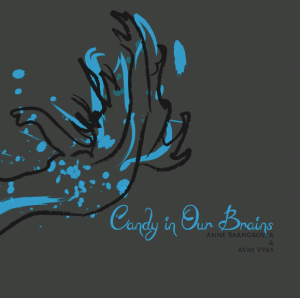 A collaboration between Anne Barngrover and Avni Vyas, Candy in Our Brains is refreshing exactly because it reads like a collaboration; that is, the transparent call-and-response mode of the poems generates a unique rapport between the two speakers of the poems (referred to as “heroines” in a number of the titles), as they set their poetic sights on topics ranging from intimate everydayness to the colorfully surreal. Thus the poems harbor the ability to implode or explode on a whim, and at will:

Maybe you are a tolling bell or a hurricane siren. You foretell famine
and marriage both. Almond milk curdles into piglet tails and still they call
me cynical. When the sky purples and hisses like strays over the hills, I sure am.

The images are often simple and pleasurable but varied, the lyricism patient yet precise—and, at the right times, playful. The core strength of these poems lies in their elasticity: the personal fears they confine to a gravely personal kernel, twirl gracefully, and then propel into vaster universal realms:

Asters and their ‘roids, plumage and earth, wattle and mortar—so many things to pack
then shoot off into space, like the time I didn’t say I love you and you didn’t say it back.

Themes of a love/hate relationship (in relation to particular culture norms, commodities, gender roles, etc.) pervade these ever twisting, ever turning poems, so it’s unsurprising that they’ve chosen to package themselves exclusively—albeit loosely—in the guise of 14 line sonnets. Something like a bipolar hyper-sonnet emerges: a poem where emotions are perpetually heightened, visceral, on edge, and ready to unmask their new monster any given second:

Once I knew this bitch who dressed
her damn parakeets in designer. Didn’t have the sense to train them, either.

And only a few lines later:

What does it really mean to go bad?

Dour, fermented, flammable. Afterburner homilies. The studio audience
is up our leotards and dead silent when I go, “Y’all shut the fuck up now.
It’s time for me to cry.

Maybe what’s most interesting to me is how this all figures in to the process of world building. In “Re-toxication Night,” easily one of my favorites, the poets, assumedly perusing a bar scene, course through what they choose to call “yes nights,” an almost self-constructed cultural wringer wherein our heroines “pass through the pickup lines as if in a turnstile… slurr[ing] prayers to the patron saints of cherry pies and booty calls.” It’s at one moment mechanically degrading—at its worst—and fulfilling and necessary at best, a very double edged sword, indeed: “What we do on this night / remains a history written in nail polish. Yes nights, we curl like scattered leaves…More / often than not, we wake under an old blanket amongst a litter of ourselves.” Here, interior and exterior blame collide and are never mutually exclusive—a nice little jolt of complexity.

Everything funnels into an intriguing and, I think, truthful snapshot of American life, where often what’s attractive, energetic, vivacious, and beautiful owes to an eerie backdrop of commodity fetishism—or, incubates the germ ready to make you a commodity. This is a snapshot of heroines resisting the best they can while still living, as we all do. The key is the interior life of these poems far outshines the crumbling exterior of the world around them—and that’s important.

In the words of our heroines, “I like the look—devastated chic.” Me too.

Candy in Our Brains is available from CutBank

Jake Syersak is an MFA Candidate in Poetry at the University of Arizona. His poems have most recently appeared or are forthcoming in Cutbank, Phoebe, and Ninth Letter. He is the author of the chapbook Notes to Wed No Toward from Plan B Press. He edits Sonora Review and Cloud Rodeo.