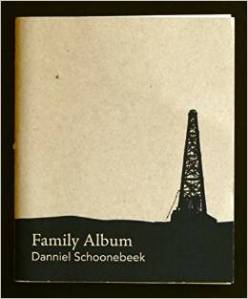 In Family Album, Danniel Schoonebeek reveals the dark side of the American family. Snapshot by snapshot (or poem by poem), Schoonebeek’s testimony of coming-of-age in an “American podunk” wasteland forces its reader to consider how our identity is often malignly formed by those closest to us, and faces the measures one takes for personal redemption.

For Schoonebeek, poetry is a remembering. Every poem is a troubling memory Son, the lackadaisical but aware narrator, has of childhood and adolescence. In what appears to be a detached demeanor towards such heavy subjects as masculinity, divorce, and sexuality, Schoonebeek smuggles in a raw sense of sadness and anger. In what feels like a whimsical form- short lines with jarring juxtapositions and peculiar animal imagery- Schoonebeek cleverly recounts life moments many fight to forget. To call his form experimental is to do it a disservice; indeed, Schoonebeek’s language and lines are deliberate, controlled, and involuntarily haunting, daring us to reconsider how poetry “does” memory, and vice versa.

One of the main themes in Family Album is masculinity and its gendered association with aggression, violence, and bravado. Through boyhood rituals like gun shooting and playing with toy soldiers, Schoonebeek tackles masculinity bare fisted and head on, as exemplified by one of the first poems in the book, “Exemplar”:

savagery back down
his stone

In this father-son moment, a violent act is what bonds the two, or so Father believes. Through shooting, Father asserts that true masculinity equals machismo and destruction. It is in Son’s inability to inherit his father’s rough-and-tumble attitude that his identity is forged—
in shame, that is. The shame and fear Son has of disappointing his father carries him into a fragile and nihilistic adulthood, as seen in “Firebrand”:

our pink slips our cheekbones our pickaxes namesakes our lock picks

& worst of all
the smoldering looks

to which our pops
couldn’t help but betroth us

No story of the quintessential “dysfunctional American family” is complete without its most important catalyst, divorce. It is Son’s parents’ separation that floods him with antagonism. In “Alimony”, Schoonebeek sparingly but soberly details this pivotal moment in his adolescence:

Indeed, Father’s split from Mother is the culmination of Son’s newfangled freedom from the gendered expectations of male behavior to his establishment as “man of the house”. But as we glean from “Landslide”, the position does not come without its own baggage:

Father they crown
son king
of your rust

but forget
in the fanfare

this means he rules everything

Through Schoonebeek’s unadorned alliteration and disorienting enjambment, Son remains cognizant that although Father is gone, he will still not live up to anyone’s expectations. Fundamentally, the chaos and confusion Father leaves in his wake is residue on the Son’s hands and heart.

In Family Album, it’s difficult not to regard the familial relationships as incestuous. Indeed, the relationships between Son and Mother, Son and Sister, even Son and Father, operate on some level of incest, if only metaphorical or emotional. The theme of sexuality in Schoonebeek’s poems reek of an Oedipal complex so daft, the exchanges between Son and Father/Mother/Sister come off deeply disturbing. Nowhere is this more startling then in “First Kiss”, where Son’s first sexual moment is with his mother, or in “Allowance”, a poem punctured by sibling rivalry and bestiality:

Whether the incest is accidental or unconscious is left undetermined, as Schoonebeek makes no effort to explain or elaborate.

When it’s not immoral, sex is either a muted and tedious activity or another shame-fest. In “Pasture”, this is highlighted when Son bequeaths Sister with a strange parting gift:

I’m shamed with her limbs
to her knots

she says as she scrapes past
son’s window

I’m shame
that feels for its leaves in the dark

Wonderfully wrenching and well-crafted, Family Album unabashedly details an everyman’s walk down memory lane. In Son’s journey, the lane is fraught with demons and dirty laundry. There is no cataclysmic ending to Son’s growing-up, but a gloriously gratifying (albeit morbid) one. Family Album concludes with the speaker leaving home, moving beyond his sordid story the only way he knows how: by brutally destroying it, as noted in “Briefcase”:

There’s no hint of Son reconciling his trauma, but somehow, we believe that the shot was for the best. Thus, it is not in Son’s survival that Schoonebeek delivers with Family Album. What he does best through these poems is trouble our own coming-of-age memory, disrupt our own idea of what’s “past”. Schoonebeek doesn’t shatter the illusion of the white (picket-fenced) family; rather, he picks up every piece and examines it until all that is left is dust.

Family Album is currently sold out at Poor Claudia and SPD, but is available from Amazon.com

Marina Carreira is a Luso-American writer from the Ironbound section of Newark, NJ. A graduate of Montclair State University with a BA in English and a minor in Women’s Studies, she received the MSU English Dept. Creative Writing Award in Poetry for her poem “The Morning after Your Death” in 2004. She was also a panelist at the April 2005 Rider University Statewide Gender Studies Colloquium: “Undisciplined” Student Conference, where she read and discussed her essay But Why Do I Want to Be a Mother? The Social Construction of Motherhood. Marina holds an MFA in Creative Writing from Rutgers University, and is curator of “Brick City Speaks”, a monthly reading series at Hell’s Kitchen Lounge in Newark, NJ.