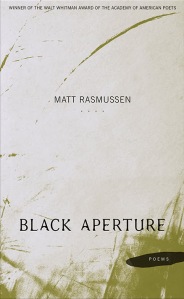 In his debut book Black Aperture, Matt Rasmussen is very demanding of his reader. He requires us to approach the book’s single, unrelenting subject—his brother’s suicide—with the endurance and devastating resolve of a fellow griever, refusing us the distance or the comfort of audience. His poems are upsetting and simple, darkly surreal, and their images linger long after the page is turned. In “After Suicide,” the second poem in the collection, his brother stands in the light of the fridge, milk pouring out of the bullet hole in his head as he keeps on drinking.

But despite his single force and vision, it is not Rasmussen’s aim to steamroller us under the poem-by-poem rotations of his grief. And neither, it is important to point out, is Black Aperture merely an exercise in therapy. Instead, he nods towards his intentions in the collection’s first poem, aptly titled “Trajectory”:

a flame that propels it.

to maintain a shallow arc,

In approaching Black Aperture, it is in some ways helpful to think of Rasmussen as “the spent day,” his brother as “the flame that propels him,” and the book itself as the “bullet” curving in a steady but “shallow arc.” There are, of course, problems with this as a cohesive metaphor for the collection, so Rasmussen gives us others along the way. In another “After Suicide,” he writes,

In the hallway of life

you were a rose with no stem

and I, the janitor sweeping

This image works better in some ways, because although the book does follow a bullet-like trajectory, never wavering from the subject and arriving abruptly at a stark acceptance, the poems are infinitely varied. Rasmussen takes his one subject and, like petals from a flower, disperses it: his brother’s suicide becomes a prayer in an airplane at night, a dream of the Land O’ Lakes girl, a sonnet where the now departed tells us that “No island is an island…./There is no new land,/ just the same body broken open” (“The Wave,” 12-14). In the final poem of Part I, “Chekhov’s Gun,” we think we are the audience to the suicide, but we realize at the end that we are the gun, waiting to see if he will pull the trigger. This is what Rasmussen does to his reader with his brother’s death: he engulfs us so absolutely in the poem, in the stillness surrounding violence, and in his own obsession, that we are inseparable from him and his brother and from the book.

Both the strength of Rasmussen’s original vision and the methodical intelligence of its execution also justify the book’s few weaknesses. What springs to mind, most notably, is the number of poems about poetry, with titles like “I Am Not A Poem” and “A Poem In Which Leaves Again Figure Prominently.” In another book, this trope might feel pretentious or overdone, but here, it is part of the journey. Black Aperture is an excavation: the author brings a single event into high relief and examines it with all his senses, from every angle. This is a book of obsessions, from the idea of wearing his brother’s hands like gloves to the image of a man alone in a field, and poetry itself is necessarily one of them. Addressing the relationship between poet, poem, and subject is another petal on the floor that this janitor must sweep away; despite this justification, though, these poems mark where the cohesion of the book is least strong.

But then there are poems like “X,” the second of thirteen elegies all bearing the same title:

I am the pistol

saying, I will only

This is what Matt Rasmussen does best. He suspends us in a terrible moment with his slow couplets, his line breaks, his monosyllables, until we’re thinking with him and the eerie image he arrives at feels all too natural and possible. In this way he’s like a lyrical Magritte, showing us a ruinous new truth we understand as soon as we see. But he also knows better than to systematically overwhelm his reader with darkness. He includes the occasional moment of triumph, as in “Reverse Suicide,” the second-to-last poem in the collection. For one uplifting page, he takes away the causality and lets the surrealism that has ruled this book from the beginning work in his favor. Seasons run backwards at the end, fall unraveling into summer as

we pour bag after bag

of leaves on the lawn,

waiting for them to leap

Black Aperture is all the more wrenching for this image of anticipatory joy, because once having read the ending of “X,” we are unlikely to forget it:

with its one lit window,

Emma Hine is currently pursuing her MFA in poetry at NYU. She received her BA in English from Washington University in St. Louis, and she is originally from Austin, Texas. Her poetry has appeared in Poetry Quarterly, Hayden’s Ferry Review, and The Bitter Oleander.