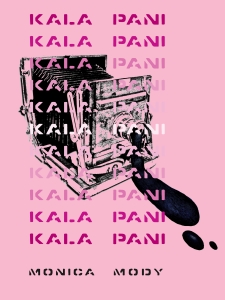 Kala Pani: opening shot, the audience & we are immediately, irreversibly accessories to its crime-en-scène, the impossible play of its cruel theatre. We are offered a shot of its sugar butter cocktail, drunk to see “what the world is doing right now”:

The world is, like the conversations detailed by its six marooned world travelers, “in tatters.” These travelers, arrested in time/space by the new world government, unravel their mise en abîme of the fungible Sameshape & Othershape, a bracing litany of ducks, and a slut-shamed lentil bean in their broken dialogue, broadcast over webcam and radio, the stream of their exchange tapped and disrupted by memes of gossip rag tell-alls, the Rational President’s empty PSA’s, and a rabid Ideologue’s perestroika.

…That wears the crown rests easy. Therefore the tree,

having learnt its lesson well, found itself in this

Writhed and moaned inside the car, and

Secretly felt something wet rushing in its veins

something like a sponge something swelling as it spied

hair stuck to its scalp. The tree, aroused, touched

Mouths on each other, did not [sense the danger]

So rest and writhe these characters and stories ‘neath the Tumtum tree, [a Banyan tree, a Nimtree, a Poetry], tongues and tales wagging in double-time. Mody deftly unpacks these narratives with a traveler’s resourcefulness, using up every item in the utilitarian sponge bag of formal devices and turning well-groomed stories out its plastic edges. Her stories bleed through the dialogue tags of a shifting cast, interrupting (and simultaneously permitting) a fluid reading experience, for the convulsing, contracting text constantly demands our vigilance as it indulges our fleeting attentions, ever-broadening to accommodate its myriad/polyvocal forms. These characters and tales exist, ostensibly, as an array of amuse-bouches to stave off the hunger of prying eyes and wagging tongues—and for the reader, this raison d’être unfolds as their in[ter]ventions in language—the stunning beauty of their fantastic creations, the deftness of their phrasal turns, as in the Fourth World Traveler’s account of the lentil bean,

…A3. There was nothing in its pheromone hamper. Out of deep shame and anxiety, it decided to wear only t-shirts and pajamas for an entire month/year. It turned up wearing increasingly sexless t-shirts and pajamas. Its favourite, a poplin forest green pair with embroidered elephants and a drawstring waist. The elephant, humbled, wandered off. Tusk, tusk. The lentil bean woke up sweating in them and also spent the day in them. Thrifty-eyed, its mother scolded, but the lentil bean was growing up fast.

or the stripped-down Steinian syntax of the Fifth World Traveler’s meditation on ducks:

The gestalt of Kala Pani’s characters lies in this work, of art, of a gendered racialized geo-graphic and identitied—simultaneously, flatly localized and unlocatable—performance, of translated and nontransferrable narration, a work that systematically and rhizomatically deflowers language hierarchies and codes of conduct. It’s been “more than [two] years since six clients were chosen as part of the new government’s plan to reappraise its official position on the borders of the world,” the Culture & Society Special Report informs, and their work “is far from over.” The work Kala Pani’s characters perform on language rips open its seams and strips it down/up to code; in Sameshape & Othershape’s (now Sameshape Jaan and Othershape Jaan, a Punjabi and Hindi term denoting the dearest and closest of lovers) closing act, their frantic love-declarations are encrypted in seemingly nonsensical strings of Anglo names:

Our undaunted six and the “contorted face of the revolution” flagging, they too, like the world they quintessentialize, dematerialize in a last show of artifice, sent to a funeral pyre, to be dis-armisticed and leaked out/in history’s annals. The film concludes with a beauty shot of the giving tree felled to a ground that “grew movie star sunglasses.” The final scene turns its camera on us, the audience:

Apperceptive shot. The epilogue looks around from the toaster, ready for butter…Who is this movie about? How long ago was longing seized? Did it sneeze? Am I truthful, or are you? Add up I+you? 1+2?

and Mody interrogates our mercurial affections and the anonymous collective schadenfreude of our surveillance society. Language, attention, and [in]actions are put on trial a final time, sweetly interrogating our convictions and sentencing us—“The ease with which the pipeline is buried here? Pipe it, sweet youth.” If Kala Pani be the film of langue, pipe on!