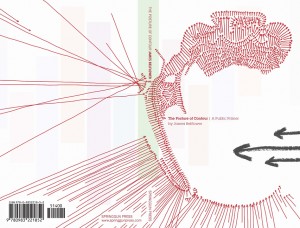 In order to come to an understanding of The Posture of Contour, we might start by identifying the importance of each of the operative components in the title. I’m going to begin at the end: Primer. To be blunt about it, a primer is an instrument used to teach basic information. As such, I believe the most sufficient review I can give this book should be informed by what I have learned from it. Ordinarily I would avoid the rhetoric of “lesson learning” in relation to poetry. The implication of an easy transaction between a student and a teacher feels fraught with complication. But with Belflower’s book, I feel comfortably compelled to reflect on my education.

What is even more surprising to me about this is that Belflower has achieved this trust despite the fact that the primer begins with a corrupted quotation taken from a Wikipedia entry titled “Fluid Dynamics.” Take the opening lines for example: “Fluids are begged to obey the continuum assumption. They are composed of molecules that collide with one another and solid objects, such as horns.” Even without my emphasis on the tampered words it’s pretty obvious that something hinky is going on in these lines. There is a discrepancy here between the scientific language and the emotional bearing brought upon that language, not to mention the non sequitur “such as horns.” Directly below this passage is what seems to be a pictorial representation of the description:

As you can see, the “Discrete Molecules” seem to create a “Smile.” The page opposite this is the preface title page. There is an epigram: “Hey Johnny, “The word preface is an indication that a book, like its author must have a face . . .” What I’m trying to get at here is that even if the book does begin out somewhat duplicitously, it does it in a way that is obvious and campy. It makes you laugh despite yourself. Whatever preconceived notions one might have had about what a serious book of poetry should do and how it should do it have clearly been thrown—with a knowing grin—out the window. The preface also provides a url to a SoundCloud page, the contents of which (it’s tags are “experimental,” “lo-fi,” “noise,” and “dronescape” among others, so it’s not exactly music in the conventional sense) can be listened to while the primer is read—making the primer “a read along adventure” in Belflower’s words (and, again, there is an earnestness at play here that makes me want to trust it). Later on, the primer makes reference to jazz saxophonist Albert Ayler. If you can get your hands on any of his music, it also provides excellent accompaniment.

This primer isn’t, however, meant only to be read. It also serves as performance notes for a “Virtuoso.” Here is an example of one that appears half a dozen times:

To Virtuoso: Read italicized section in a low soothing voice, as if an aside. Make sure your gaze focuses on something besides the audience. One of your main purposes, but not the only one, is to make them relax and trust the introduction of your voice.

These directions would be all the more perplexing if I hadn’t seen James Belflower read from this book. You can watch a recording of his performance here. All of the gestures in this performance have their basis in these notes “To Virtuoso.” This emphasis on physical gesture relates back to the “posture” of Posture of Contour. But it is “of Contour.” So what, then, is meant by contour?

Contour is maybe the single most important constituent. It is repeatedly defined from different vantage points. The first definition of contour involves separating the syllables. The book places emphasis on “tour.” Meaning that a given constituent—whether that be a word, a phrase, or a letter—isn’t stable, it can go on “tour,” it can be a “tourist.” The Virtuoso explains this better than I can:

Let’s claim that the “a” that introduces the phrase directly above is a different “a” from that which travels and which ends it. So, in some moments it tours a man, plan, canal and Panama. In other senses we suspect it may be identical in form, but not in time. We are on a canal.

Let’s say that where there’s a choice there’s not only a place.

Let’s say there’s a potential “a” that the reader and a spectator spot.

Let’s say there’s no secure distinction between “a.”

to address address. This is you. This is that. For our speaking that will be from this point forward.

But it is also abandon.

This passage is representative of not only the dense wordplay that is almost constantly working in Posture of Contour, but also of the tone that it is written in. The voice is confident in its knowledge, but it also has an easy way of speaking. This passage also introduces the idea of a “spectator,” which becomes important in the second half of the primer.

Which bring us to the structure of the primer. The primer is sectioned into two parts, and within these parts there are addresses to different kinds of flow: inviscid, laminar, molecular, secondary, couette, incomprehensible, open-channel, and compressible flow. If you don’t know what any of these are, don’t worry, neither did I. Neither do I. Most of the kinds of flow are accompanied by an equation. I began, at first, by trying to understand the math behind these equations, but it became clear very quickly that they deal in high-level math which is well above my level of understanding. Fortunately, it doesn’t seem to be the math of the equation which is necessarily the most important part. Just as with the corrupted Wikipedia entry, the equations are taken out of their context. For instance “To Address Laminar Flow” is accompanied by the equation

The Virtuoso says of it,

So by the time we solve the final “k,” the “u” at the beginning may be someone else. Someone who no longer signs their last name “x.” This might suggest that emancipation no longer solves for community. K?

The Virtuoso puns on “u” and its homonym “you,” destabilizing it. This destabilization allows the “u” to “go on tour” just as the “a” did in the palindrome.

What this gestures toward (apparently this review has even gone on a tour), is that contour is related to flow. This is meant in the literal/physical sense, but also in a more theoretical sense. Think Deleuze and Guattari here—Deleuze’s work in film theory (“. . . all consciousness is something, it is indistinguishable from the things that is from the image of light”) as well as D&G’s A Thousand Plateaus (“Yes, yes I have been my father and I have been my son”) are both quoted herein. While we’re on Deleuze and Guattari, this book—in a decidedly post-structuralist fashion—is endlessly allusive, and as any good primer does, this one includes a bibliography. The list has almost seventy entries ranging from philosophical and literarily theoretical (Agamben, Badiou, Rancière), to poetic (Oppen, Patchen, Spicer), to Wikipedia entries (“Fluid Dynamics” and “Lamplighter Group.”).

What this all points (on tour) to, what I have learned and learned and learned, is that there is a different understanding of the world than one in which we have been hitherto presented. When the constituents of a given language set, mathematics for example, are reconsidered in terms of an irrational, which is to say not rational, frame of understanding, another subjectivity which was perhaps suppressed is allowed to be the frame of reference. A mathematical expression seeks to isolate and identify a very specific phenomenon, the pun of “u” and “you,” ignores—or at the very least, considers alongside—this impulse, preferring subjectivity. The Virtuoso quotes Walter Benjamin, “‘Poetry was initially nothing other than concealed theology;” the The Virtuoso counters, “Why not call concealed theology communication.

The Posture of Contour: A Public Primer, by James Belflower is available from Springgun Press: $16